What to pack in your Hospital Bag (for Labour)

It's best to pack 2 bags; Mom Bag & Baby Bag. Make sure everyone around the house knows where these bags are kept and label them if you need to.

For a new mom, packing these bags can be quite daunting. Here I will share with you what I've decided to put in my Hospital Bags.

11. Sarong
Comfortable and easy to remove.

When packing clothes for yourself, remember that you will only need them when you are leaving the ward as once you get checked in you will be handed those lovely, adorable (horrible but comfortable) hospital blouses and sarong to wear so don't pack like going for a vacay!


Additional Items that I will be packing later:
1. Loo Roll
2. Go Girl
3. Make Up (yeah right..but just bring it)
4. Hair Tie
5. Handphone & charger
6. Camera with charged batteries
7. Tab / Laptop with some movies
8. Stress Ball (last time I kept throwing it around the room during labour and my husband had to keep bringing it back to me lol) 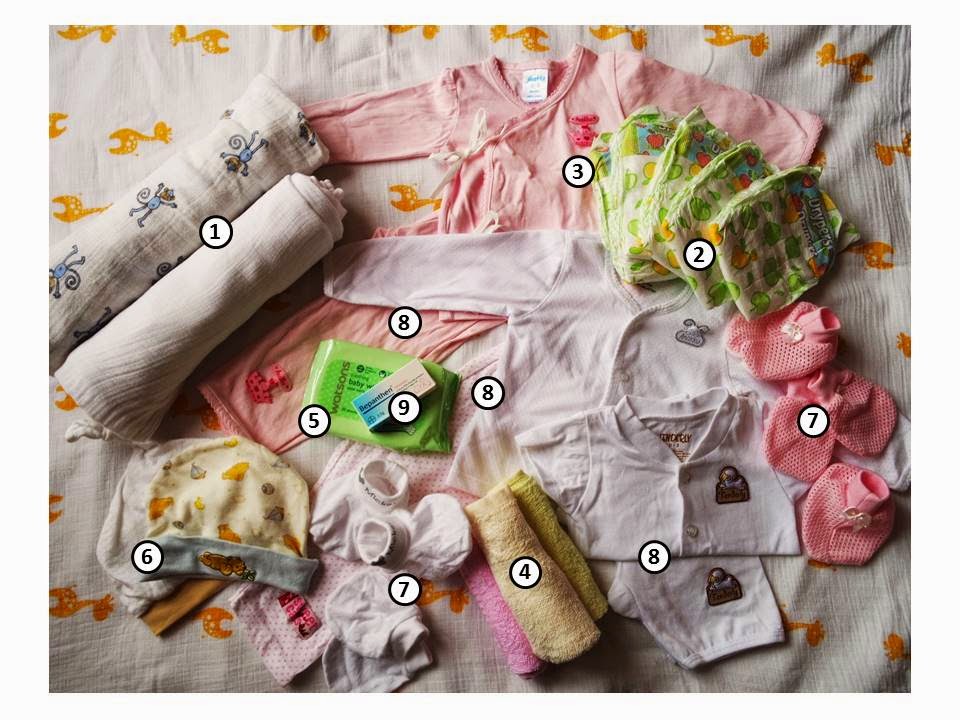 1. Swaddle Cloth x 3
I recommend you get ones that look like huge nappies from Aden & Anais. They are very versatile and can be used as swaddle cloth, nursing cover, blanket, mattress protector...

2. Newborn Diapers
You would probably need more if you have to stay over at the Hospital. Just pack some in the bag and rest can be put in the car.

3. Receiving Clothes
The first top that baby will wear. The top should be front opening as opposed to a t-shirt that you put through the head as baby's head & neck is still floppy. I would also recommend the tie string type as it overlaps the chest and provides baby with more warmth.

8. Spare Clothes
Just in case the stay is longer

Other items not in this list:
1. Baby Bath
2. Towel

When you are wheeled in to labour, your husband or birth partner may need to bring along the Baby's first clothes, newborn diaper and swaddle cloth / receiving blanket. I've neatly packed it separately to avoid and chaotic situation (I'm not dramatizing it okay..can you imagine your hubby digging your bag looking for matching baby stuff and asking you while you are having intense labor cramps?).


One last thing to ensure is your car is fitted with an Infant Car Seat (Group 0) for the ride home. Of all the things to scrooge on, a car sear is definitely not one of them. The Infant Car Seat can be used till the baby is about 10kg (depending on model), after that you can get a Group 1 seat which can be used up to 18kg. There are many kind of seats, do your research and get what is suitable for your budget and lifestyle. Some Group 0 seats triple up as a baby carrier as well as can be fixed on to a pram. There are also some convertible seats from Group 0 to Group 1.

Hope this helps especially for new mamas out there. All the best on your delivery.

Posted by Jaishana Logan at 6:00 AM 3 comments:

15 Differences Between My First Pregnancy and My Second Pregnancy 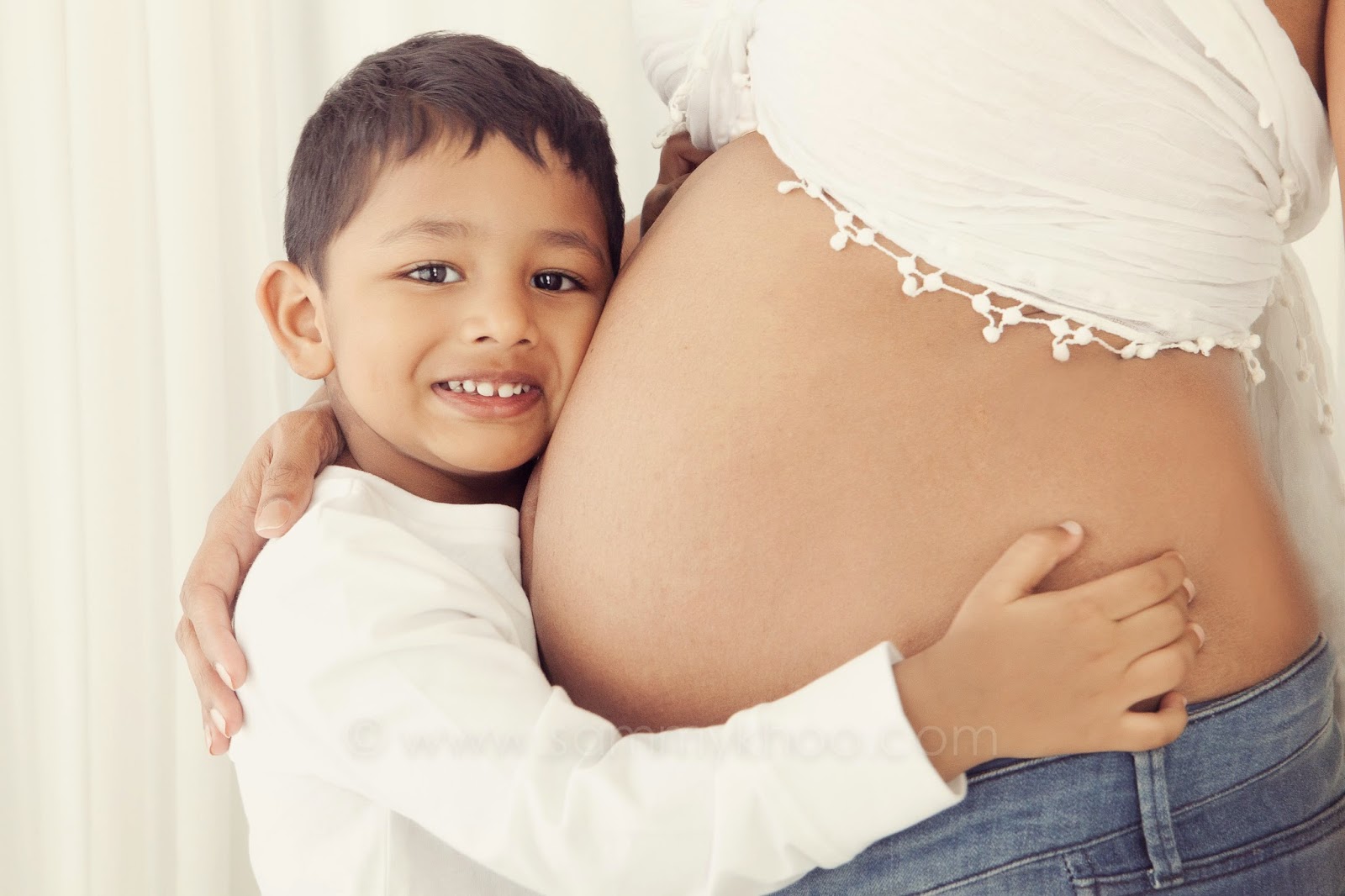 I think all moms will agree that there are a differences between the First Pregnancy and the Second (and consecutive ones).

Here is my account of the differences between my first and second pregnancy:

1. Excitement Level
First Preg: Everyone was so excited! We were so excited. All we thought of was baby, what would he be like, who would he look like and such.

Second Preg: We were very excited to find out. Unfortunately we didn't talk to our bump as much. People were like 'Oh congratulations' or 'Oh you are pregnant again' or 'Oh, so soon'.


2. Baby Paranoia
First Preg: Constant worrying about how baby will turn out. Would he be healthy, would he be slow, would he be autistic, his sexual orientation and how we would handle that and the list goes on. I would think of all family members and wonder if he would inherit any of their traits.


3. Pregnancy Awareness
First Preg: I was constantly thinking about being pregnant. Everything I did, I would wonder how it would effect the baby.

4. Minimizing Activities
First Preg: I was so paranoid that I may lose the baby that I minimized all my activities. I didn't travel or go to concerts like as if the baby will suddenly drop out :p I used to just whale around in front of the TV or laptop and reading baby stuff.

Second Preg: Life goes on. I was still able to dance vigorously up till my 7th month of pregnancy. Now at 9 months I still carry my First child when he wants me too or when I feel like it (cos I know the day will come that I wont be able to do this), we play catch, run around and dance. With the first one around there is no lazing around option anyway, kids gotta eat, bathe and such you see. 'Me' went out the window as soon as the first one pops out.

5. TV and Electronic Entertainment
First Preg: Anything and Everything I want to watch.

Second Preg: Disney Junior. My laptop and handphone is constantly hijacked to watch Pocoyo, Dibo The Gift Dragon, Kids Songs and the likes. When I do get to switch on the TV, there is nothing to watch. Thank  you ASTRO...

Second Preg: My son loves to sleep late and wake up early. So his 2 hrs of afternoon sleep is when I get to do any other chores.

7. Expectations from strangers
First Preg: Whenever I would take public transport or in a public space I would expect someone to offer a helping hand or give up a seat.

Second Preg: I have toughened up and excepted that some people may need their seat more than me. I'm probably stronger than them anyway. Once you become a mom you develop super powers you know.

8. Food Choices
First Preg: I used to be on a strict diet before pregnancy but as soon as I found out I was pregnant I became a human vacuum cleaner. I used to treat myself to ice-cream and the likes every day. I used to consume 2 glasses of Anmum Materna which on hind sight was not necessary and contributed to my crazy weight gain. At the end of my pregnancy I put on a good 30kg! That's right.

Second Preg: I snacked mostly on fruits (If I need a snack). If not I keep to 4 meals a day. So far at 9 months plus the weight gain is 19kg which is good compared to my First Preg.

9. Stretch Marks
First Preg: The nurses and doctors told me I had a very beautiful bump. Although it was big there were no stretchmarks. I used Palmers Cocoa Butter at that time and it seemed to help.

Second Preg: During the end of First Trimester my belly and torso started to flake like mad you can't even imagine. Nothing seemed to help, not even my trustee Palmers Cocoa Butter, Vaseline, this expensive cream called Stricell Strechmark Cream till I found the magic potion that is Bio Oil!

10.  Baby Bump Pictures
First Preg: My hubby was not so big on taking professional pics. I had a free session which I didn't really have fun as it didn't involve my hubby. The outcome of the pics I never really did share with anyone as the looked kind of gloomy. Probably projecting my mood at that time.

Second Preg: My hubby was very supportive and we went all out and spent a bomb on a professional shoot. It was really nice to have hubby and child number one on the shoot. My son constantly wants to hold, hug and kiss my baby bump.

Second Preg: I wore my normal clothes as much as possible and was able to mix match with my maternity wear right till the 9th month. I suppose this is easier for mom's who didn't put on too much weight.


12. Doctors Visits
First Preg: Hubby dearest would follow diligently to every visit. We would look forward to every scan.

Second Preg: It doesn't really matter if I have to go alone really. It's just being pregnant..not some life threatening thing lol, tho hubby dearest still takes me to most of the visit I really don't mind if he can't come to some at all. Like I said before... you develop super powers after becoming a mom.


13. Indian Aunties
First Preg: Everyone wanted to cook for me and I had to finish everything that was put on my plate!

Second Preg: Got one invitation but haven't gone yet. I'm not so big on eating a lot at the moment. No hard feelings yea?


14. Insecurities
First Preg: I was mighty insecure. Going from a hot chick to a 'well-rounded' mom. It is embarrassing to admit but I used to sniff my poor husbands shirts for any other female scent (Sorry hun, I love you).

Second Preg: I've never felt sexier. Not even in my model body.


15. Dreams
First Preg: A whole lotta SX dreams... Never had any so surreal, not even during puberty or ever. It's really confusing as being a mom supposed to be something so earthy and angelic and then you have all these strange feelings and thoughts. .

Second Preg: Just some dreams. Like 3 maybe. The rest of the time, Im so tired that when I hit the bed its KO Mother......! ha


Above are just my differences and I'm pretty sure it varies from mom to mom. It would be fun to hear how similar or different you or someone you know felt while being pregnant.