The Most FulfillingNew Year Ever Part 2

The 1st of January 2010 and the 2 of January 2010 kind of fused together for the Markandoo family. After ushering in the new year me and Sujen left around 6.30am after helping mom clean up. Some of the cousins slept much later which was a good thing cos it was like sleeping in shifts. Don't get it? Well we did not have enough rooms and bedding for such a big crowd, so the first to sleep were the uncles and aunties and when they woke up the kids went to bed =) 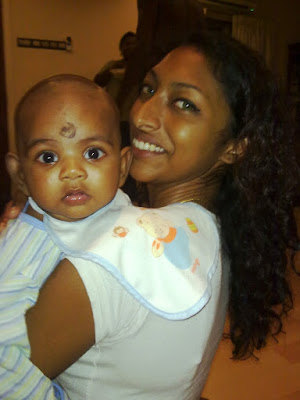 Keashaav - the youngest addition to the Markandoo family. He's adored by all. He doesn't cry either! Just d occasional "uwaa!" for milk.
My dad had planned another fun outing for us all. We were to go Go-Karting at noon. Eventhough everyone was still tired from the night before, we made sure we woke up in time to take to the tracks. We were not sure if the two little ones could ride the Go-Karts as well cos we knew there was bound to be an age or height limit. They were obviously a bit disappointed when I told them on the way to the circuit that they have to be prepared to be not able to race with us. But i quickly added that if that were to happen I promise to take them to the game arcade so they could race there.

We were lucky that we reached there at 1.45pm cos we found out when we reached that they were opening at 2pm that day. 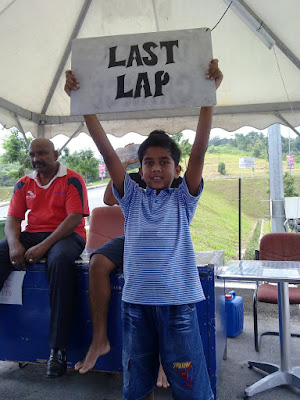 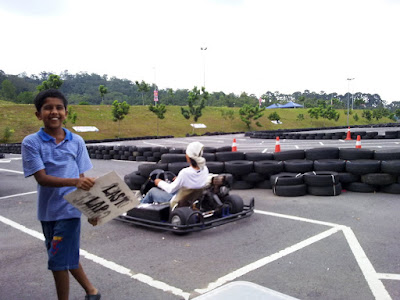 After signing the waiver we got down to business =) 8 cars n 8 racers. Cos my dad and my brother are frequent visitors to that place we got a good deal. Instead of RM 20 for 10 mins we got 14 mins and it was broken up to two rounds. If you go kart often you would realise that its dirt cheap the price I just quoted here. SO if you are thinking of going there its in MARDI but I have to warn you that all the cars are not synchronized to the same speed so its kinda hard to gage the true winner. Oh and the helmet and the hand guard is not properly cleaned either =p Haha so perhaps you could bring your own gear? 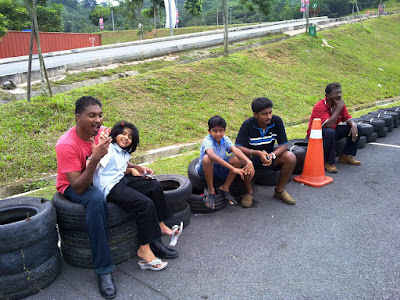 After the group race we watch Ian and Sujen battle it out on the Go Karts. Too bad that one of the karts was uder powered. 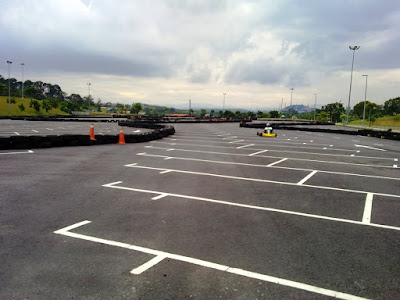 After go-karting and returning for lunch and tea it was another long night of family time. Just chilling out. The next day would be my nephew's 3rd Birthday celebration. 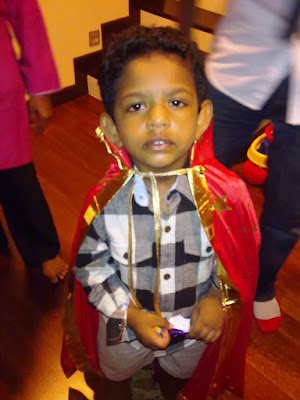 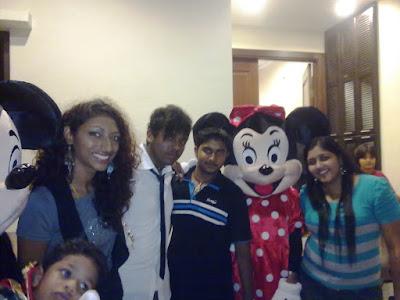 The party was every kid and over grown kid's dream come true complete with a visit from Mickey and Mini, a cute Clown that entertained the kids with a Magic Show and lotsa fun games, and a temporary tattoo corner. 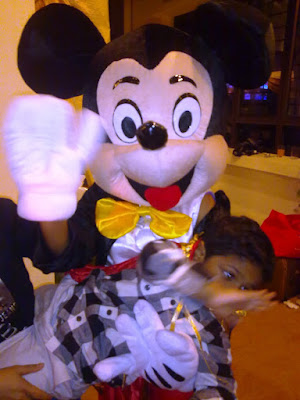 Damn...He can't even see properly and is lifting a kid in one hand and waving at me.

I was given the task of video recording the event. It was apparent that the kids really enjoyed the Clown's performance, but it was the older brother's and sister's that were making much hoo-ha to the point that the Clown called up my brother Ian as one of the volunteers or should I say victims.

That is when we found out that Lolly the Clown was Indian. When Ian went up Lolly put his hand around him and my cousin voice could be heard in the background "Kai vetchitaaaan". Lolly then paused and looked in her direction and replied "Yenna? Kai vetchitaaanaa?" , that shut her up for a moment. ROTFL
[Translation : Cousin,"He's got his hands on him!". Lolly,"Whaaat? He's got his hands on hiiim?"] well it's a lot funnier in Tamil i gota tell you that.

He then asked my brother Ian to pick two pretty girls and he just HAD to pick me and my cousin Loshny who made that funny comment! I wanted to smack him LOL. But in the end the joke was on Ian cos the trick was like this:

Then he tied two handkerchiefs together and put it in Ian's front pocket. He made us hold it on either end.
Lolly: Okay...you girsl dont pull ah.

He said some abracadebra thing and the kids chanted along with him as he tapped Ian's belt.
Lolly: Don't pull ok. I said dont pull. (he hold our hand and tugs the handkerchief)

TADAAA appears a huge pink granny panty between the handkerchief.

The kids loved it! 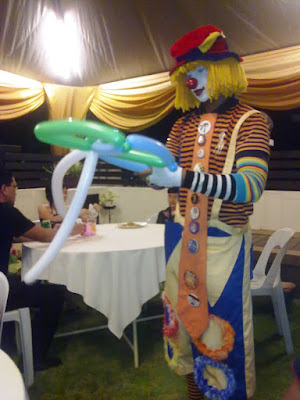 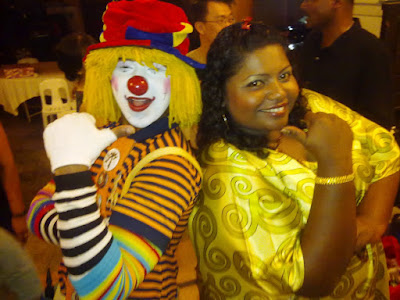 Cousin Promo with the sporting clown. I told my mom and my husband that I want a clown for my birthday too.

Sujen and me took our leave early cos we had bought tickets to Dr. Parnasus at 12am. While waiting I beat Sujen and a coupla guys in Daytona eheh. I just had to annouce that.
Posted by Jaishana Logan at 9:05 AM

I wish you a Happy Near Year! Beautiful family pretty photo!

Clown who pulls out a panty? Forget strippers honey, I'm hiring that same clown for a hens night - must convince my almost married friend to accept my idea...

Ana>thanks dear. happy new year to you too. Hope you had as much fun as we did =) mmmuacks

Dom> hmm yeah...maybe he could strip from inside out LOL. Nakal

u got a really awesome family babe..... really know how to live it up - i gotta say, i loved the idea of the costume party. Gladiator and the Egyptian queen are the best-dressed ^5

Arcades? I'm an old hand at the shoot 'em up + bang bang games, but I suck at Daytona =P

Hedrick> thanks. they are quite a crazy bunch. By the way the egyptian queen n the gladiator are wife and husband lol.

Bang bang is fun too. i just don't go often. I actually probab;y suck at most of the games. I see some kids go like alllllll the time! They'd probably kick my butt at it. Oh n i never have had the balls to play those dancing games. haha. it fun to watch tho.

Nice pics!!!!!!!!!!!1
you have a great family.
I must say you are living with your family so nicely.
Thanks for this b'ful blog.
I also said my family to do the same enjoy and be happy always.