As we were driving back from KL few days before new year, Sujen suddenly blurted out " We are going to do some charity work on the 3 of January, so don't make plans." "Why?" I asked, but I didn't mean it like "Why on earth would you wana do that?" it was more like "you caught me out of surprise". 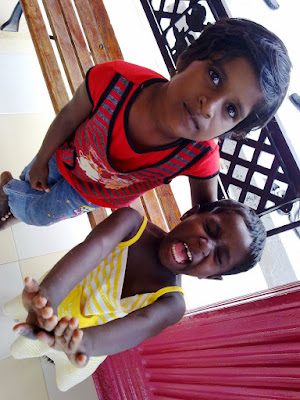 Sujen's friend Vasdave and his girlfriend Tessy were going to a welfare home on that day and had sent a message inviting those who were interested to feel free to join in. Tessy's family had organised lunch and had planned to prepare the kids for the next day which is 4 January - the start of a new school year. 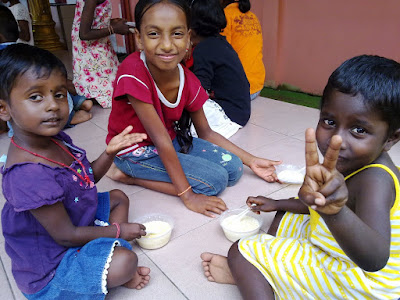 I was excited but a admittedly a little nervous. It's not like I've never been to a Welfare home or an Orphanage before. It's just that deep down inside I feel like as if its unfair to turn up all of a sudden and try to make a change in their lives. I shamefully admit that I feel so small and the emotions that run through me are too intense that they swallow me. I kept on wondering how I would make a connection with these children... 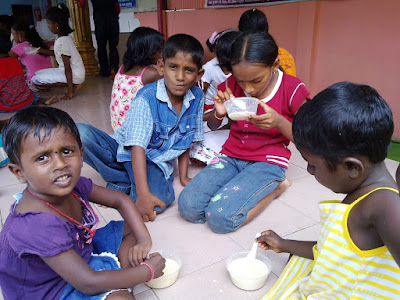 When we reached the kids helped unload the cars filled with goods for the Home. Real tiny kids insisted they could carry heavy boxes even I found heavy.

We then walked in awkwardly. Everyone gathered around and ogled at a healthy 4 month year old baby boy - the newest addition to the home. Someone said out loud "Yeah, lets start with the youngest". True. I thought to myself.

I then asked Sujen, "What do we do now?". As we approached the Dewan and sat on the platform, he said "I guess just sit down and wait for them to come to us". Just as I was about to disregard his suggestion we were swarmed by kids of all ages. The little boys got Sujen and the girls came to me, forming two distinct circles. 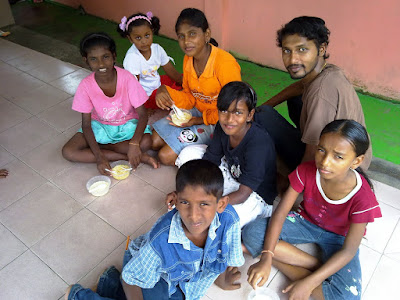 They had SO much to say. They started by asking me who my favourite Tamil Movie actor and actress were. I told them it was Surya and Simran and later added Jyothika too. I also tried to put it to them that there were better things to watch other then tamil movies all the time. It was sadly obvious that these kids spent too much time on tamil movies. 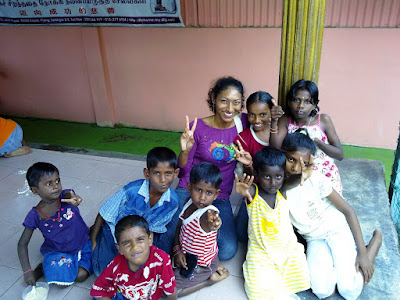 Next I found out within the first few minutes that they were sitting around me, they were actually scrutinizing me and they expected me to do the same too. How I realised this was while I was having a light moment with them, oneo f the girls pointed out that I have a dimple when I smiled =) It was shocking cos people don't usually realise my dimple and them spotting it made me smile =) After that they asked me how many moles they had on their faces. I felt so moved and it was black and white that all these kids really wanted was a little attention. Someone to hold. Someone to hug. 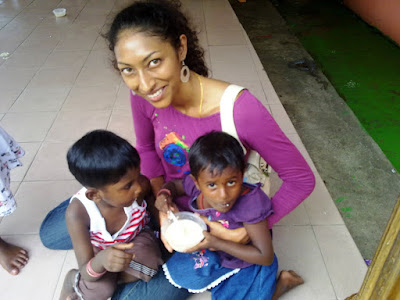 These kids brought the Tau Foo Fah too me and asked me to feed them. I played the Aeroplane trick my mum use to do with me. It was so nice to see them giggle and eat. This picture was taken by one of the 12 year olds.
As we were chit-chatting and playing with them, our friends handed Sujen and myself a box pf packet drinks each to hand out to the kids. Within moments they were diving for it, but at the end they made sure that everyone had one including me. I said its ok cos we brought it for you guys. They then told me, " No, You have to drink with us, if only a little, please". So I joined them sipping Lychee from a box. 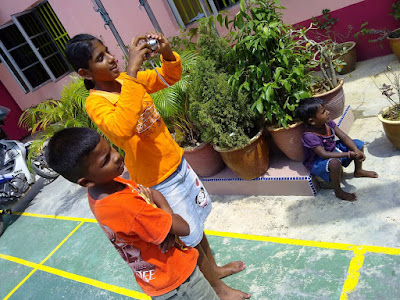 The kids seem to love snapping pictures - I refused to give them mine cos it was my new N97mini. I wasn't being mean but I just can't afford a new one and of course I'm not gona ask the Home to reimburse me for it. That would just be wrong! hehe 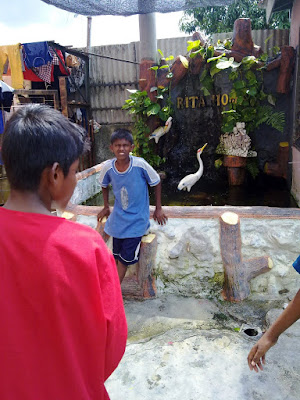 ....and love posing for pictures

The lunch bell then rang. Everyone ran to thier canteen and got seated. The Home, houses elderly people as well as mentally and physically disabled children and adults as well. We (the volunteers) then made sorta like a chain belt dishing out and serving the food to the kids and adults. Once everyone got thier food, they said a short prayer and thanked us.

Tessy's family had also organized a Tau Foo Fah man to come with his Tau Foo Fah truck to serve it as a dessert nice and hot.

After lunch and dessert, there was just more playing around, a photo op and handing out of stationary sets. 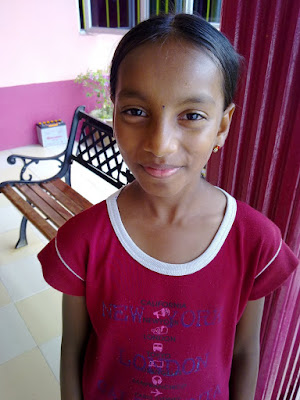 This pretty little girl was part of my entourage - she told me I have to come back there. I promise I will. 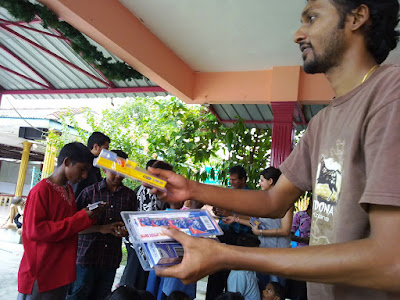 Sujen - helping to hand out the stationary sets 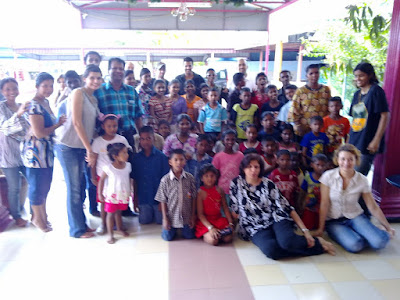 Photo Op - The volunteers and some of the kids. Where am I? Behind the camera.

As we left , they waved to us and invited us to come back for Ponggal. I shall make it a point to go back there. If anyone is interested, you are most welcome to join us.

A smile. A laugh. A moment lost in each others eyes. This was indeed the icing of my New Year cake. Thank you guys for letting us be a part of this.

Posted by Jaishana Logan at 2:22 AM

hey Abs i visited the same place when i was back in Msia with my parents. As u said, thats exactly how i felt when i was there. And i must say they are all very caring and loving. When i went, they told us to come back for Deepavali. Unfortunately I couldnt. Glad to know that someone I know does charity works too.

The next time I go I would definitely take pics...since the first time i went I felt it was not rite to take some clicks. hehe!

i know what u mean about not feeling right about taking pics, but then the kids like taking pics so much. The pics with me and the kids were taken by the older kids actually. I'm planning to print the pics and give them to the kids the next time I go...which is in 10 days.

Other then that I haven't really decided what to take along...Maybe some Peter and Jane books. Any suggestions?

Hi Abs! I've always wanted to go to charity home but don't know exactly how to do it. Can I just go to any charity homes & meet the authorities to discuss & see what I can do from there?

I loved to watched Ole-ole Chef Wan when he went to a charity home. He was a great entertainer, still is.

I also plan to help small & poor children in their educations. It would be really great to make the plan reality & not just let it rusting in the edge of my brain ;)

Well you could call them up and ask what they lack most. But your idea of going there and seeing for yourself exactly how the place is and what the children are lacking is good too, at least when you make a follow up visit you can go prepared.

In my opinion more then food and clothes, love and attention these kids need guidance and motivation in their studies. i think its a great idea that you want to help in their education. It would be the best gift ever as you will be helping to mold the younger generation plus its always better to teach one how to fish then to feed him fish.

Good luck and have fun =)

Ps. If you can gather some like minded friends to go along it would be fun plus more hands can do more work or more brains can do more coaching - however you like it.

yah abs...i missed the opportunity on taking the pics. Its great that u will take some prints and go the next time.

Well yes like u said, i do suggest books or maybe some games (boardgames or cardgames).

Hope u enjoy the company once again. Take care.

Hey,abs. I think you idea is better & proper. I just need to find their contact numbers. I do have friends who are into charity & would like to join me.

It'd be great if we can play, sing/ act for the people at the homes. Just like in Ole ole Chef Wan (they all looked really happy ;)

Education is very important & can bring significant long term benefits. Malaysia is still depending too much on foreigners. By giving better education opportunity to all our people, someday the foreigners who will ask for our expertise & products.

I feel so sad reading this :( God bless those kids, yourself and family :) Oh yea, I supported you for MDreamgirl, lol.

Zuliana > true. Now everything we have is imported technology. So sad. We don't really have anything of our own other then 'Nasi Lemak and 'Roti Canai' which i seriously don't think is 'our own' Roti Canai is like indian bread prata and nasi lemak is like some javanese food. Plus su can find these at Singapore too.

Brenda Ang> It is very sad...like how could people leave these wonderful children. I can't imagine walking in their shoes. Btw thanks for the support on MDG. God bless you too hunneh.