So you want to go on a holiday? You love the water. You love animals. Then heed my advise...Stay away from A Famosa Resort, Malacca.
It's a damn cut throat place I tell you. When you reach there you think you are in for a good deal cos the ticket for the Waterworld and Animal World together seems pretty reasonable. Well I was fooled all right.

Once you get in you have to pay for almost everything. When I walked into the Animal World, there were some 'Red Indians' that looked more like thugees. I was tryina ignore their gaze but out popped a chirpy lady saying to me 'Hi do you want to take picture with the Red Indians? They are very friendly, don't be scared.' I shook my head politely and quickly walked towards my parents. As I did so a magnificent blue n yellow parrot perched on my shoulder. A guy popped out of no where with a camera n takes a picture of me with the bird. Since we had our own camera my dad whipped it out to capture the moment. The guy quickly told us that we could not take pictures. If we want we can purchase d picture he had taken for 10 bucks. 10! 10 bucks! No thank you. Moving on.

Next we past a series of undernourished animals as we headed to the animal show. 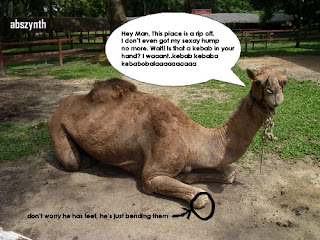 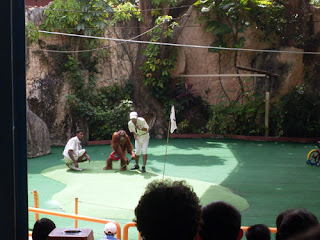 reminding us of how closely related we were to them as they executed stunts like riding a bike, dancing etc. After the show they asked us the audience if they would like to take a picture with the ape. For 10 bucks of course. 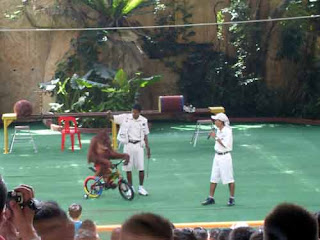 Then we followed the crowd to the bird show. 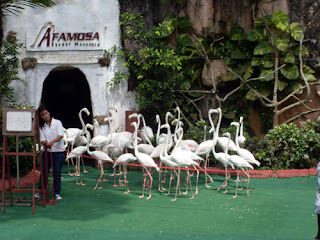 Birds doing arithmetic, birds coordinating with each other in dance, birds 'speaking' (they sounded retarded-but in a cute way, but I can't imagine how annoying that would be if I had to hear it every waking day), graceful flamingos, swooping eagle, then there were the parrots that could 'draw'. Or rather pick colours with their beaks n doodle/conteng some random thing. If I had to guess I would have said they were colour blind! 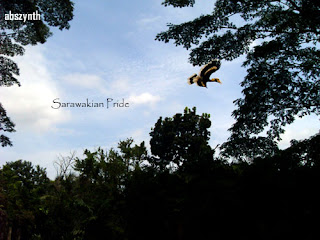 Then the highlight of the show... Parrots that fly towards you n sit on your shoulder if you hold up a .....~drum roll please~ a red note..or Ringgit Malaysia 10! There u go 10 bucks again suckers. I really pitied those parents who came with their many little goo goo eyed kids. Of course being kids it would be surreal to get a beautiful bird fly toward n perch upon you and as a parent you would want your child to experience this cos lets face it, it's not something that one would experience everyday. Yeah ok 10 bucks please. If you like the idea of colour blind creatures painting with their beaks you can also purchase d painting for 10 bucks.

I was getting sick of it.

Next we took a boat to the 'Monkey Island'. I thought they would be happily swinging from tree to tree on their island but boy was I wrong. What did they deserve to be trapped in a Monkey Guantanamo Bay? Each monkey sat quietly as if repenting their sins in a tiny concrete cell. Some cells had 2 or 3 primates or should I say INMATES. It was indeed a sorry sight I kid you not. 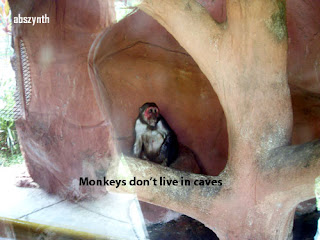 All in all it was a depressing visit for me and I still don't get the relevance of a bunch of Malay guys dressed in so called red Indian garb in the Animal World and why anyone would pay 10 bucks for a picture with them. Strange. 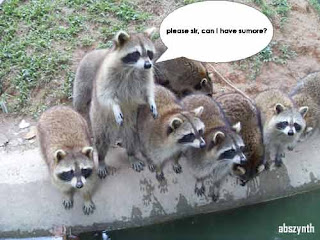 The water park was alright though.

*this is dedicated to Ashrel since you say you miss my pictures with strange captions. But....I think I'm losing my funny juice... time for a revival
Posted by Jaishana Logan at 8:46 PM

Yesssss i went there once and was so terribly depressed with looking at all the sad pathetic animals. There's one where you can take pics with a lion and a tiger, and the animal trainers INSIST that they're manja (even put his head in the tiger's jaws) which it's pretty damn obvious that they're drugged as hell

Oh and you so called get a coupon to exchange for lunch but there isn't much choice at all. Dah la I was so pissed that when I asked the woman at the counter if there was Coke she said no n she keyed in Mineral Water. When I went to the counter to collect my food I saw they had Coke. The bugger there didn't let me swap like it was a big deal. They were so rude like giving us free food.

Which got me thinking, if this is how they treat thier customers...I wonder how bad they treat those animals. Aku tamau pegi sane da.

Hey, thanks for the dedication. You should start doing this again, you know?

Haha babi betol! (I mean that in the nicest way possible).